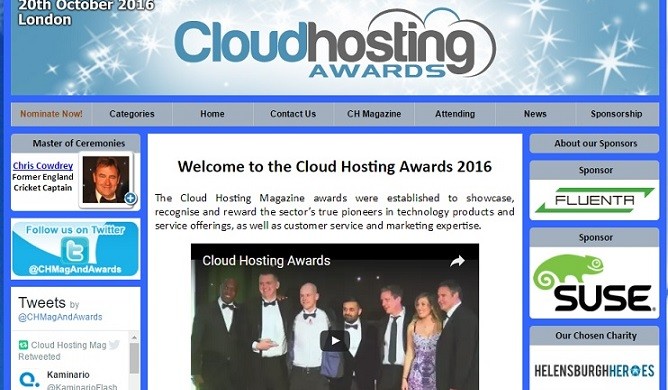 Helensburgh Heroes is delighted to announce that it has been chosen as the official charity partner by Cloud Hosting Magazine for its inaugural UK Awards ceremony.

The prestigious Cloud Hosting awards seek to showcase, recognise and reward the sector’s true pioneers in technology products and service offerings, as well as customer service and marketing expertise. The awards cover a wide variety of categories from software and hardware to projects and products that have made a significant, real and valuable contribution to the UK’s Cloud Computing industry.

Editor of Cloud Hosting magazine Dave Tyler commented: “As the magazine has become established over the last 3 years, we’ve had lots of feedback suggesting that an awards ceremony would be good for the industry. This will represent a unique opportunity for the magazine’s readers – end users as well as the industry itself – to express their opinions and show the world who is really performing at the top of their game in the cloud sector right now.”

Event Director Josh Boulton stated: ” We are extremely pleased to be able to publicly recognise and support the work of Helensburgh Heroes as it seeks to open a multi purpose Centre in Helensburgh, birthplace of technology pioneer John Logie Baird. The Centre will be designed to engage and support communities, especially the younger members, in developing a range of skills to help them thrive in today’s world. The determination shown by the Charity in attempting to bring a very ambitious project to fruition embodies the entrepreneurial spirit that we wish to recognise at the Cloud Hosting awards.”

The awards will be presented at an exclusive Black Tie event in London on the 20th October 2016 and will be hosted by former England Cricket Captain Chris Cowdrey.

Details of the awards can be found HERE